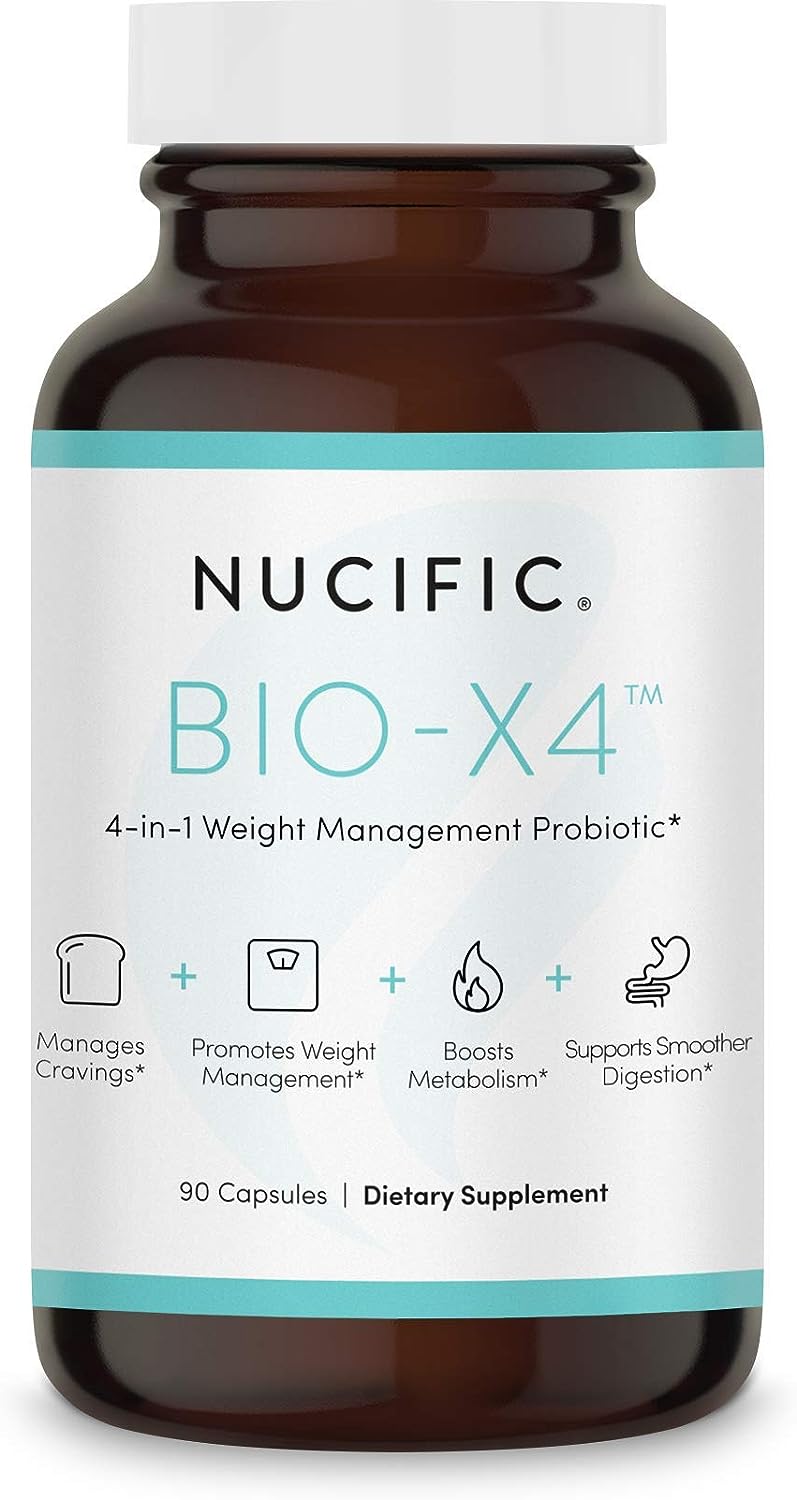 Four-way support for a slimmer body and smoother digestion!

Enjoy BIO-X4, a powerful 4-way defensive strategy against appetite, cravings, digestion, and metabolism â in 1 easy-to-use formula! Who knew looking and feeling so great could be this easy?*

BIO-X4 contains Caralluma Fimbriata, which has been shown to help ease unhealthy food cravings â a major step toward achieving the body you want. This cravings-control compound helps you say ânoâ to those snacks and unhealthy foods that can wreck your diet â and your waistline.

Nucific BIO-X4 also contains EGCG â a natural compound found in green tea, which has been shown in numerous studies to boost your metabolism and help your body burn more fat. This potent metabolism booster can help you achieve a slimmer, lighter body â while giving you the energy to enjoy every minute of every day.

BIO-X4 also has 3 key digestive enzymes â amylase, lipase, and bromelain â to help break down the foods you eat, unlocking the nutrients and easing digestive issues. These potent enzymes help you break down food more efficiently, so you get more of the nutritional benefits from the foods you eat â and can enjoy better head-to-toe health.

The unique probiotic formula in Nucific BIO-X4 helps balance your gut bacteria, which can affect your metabolism and energy levels. EGCG â the potent compound in green tea â has also been found to boost metabolism, supercharge your digestive system, and help you enjoy more energy.

As the trial is ongoing in Honduras, we add our voices in support of Berta Cáceres and others like her who are extraordinarily dedicated to helping humanity to protect what's precious on this planet: Life. They took her life thinking that they could silence her. Instead her voice grew louder as more people spoke up. We are adding our voices to those voices and the ones that come after us. Thank you Bertha Zúñiga Cáceres, Berta's daughter, for inspiring me to be more active.

Thank you JFDR, Sandrayati Fay & Josh Wilkinson for the song. Thank you all those who sent in their voices to be part of the social media choir on the song. Thank you Ólafur Arnalds, Masterkey Studios & Markéta Irglová for the help and studios. Thank you Lea de Valmi for the painting, and DM Stith for the graphic design of the EP. Thank you The Fake Pan for the cartoons & Erin Wajufos for animating them for the video. Thank you Copinha, Amnistía Internacional Américas and all at Amnesty International & Art for Amnesty for their help in making this happen. And Thank You Berta Cáceres for being brave enough to inspire us to live more courageously!

Song for Berta (Live at the Cabin) - VIDEO OUT NOW

Berta was a Honduran environmental activist and indigenous leader who was murdered in 2016.

The injustice of her death feels like it became an emblem of strength for community to gather with unwavering defence in support of what she believed in, with a call for humankind to wake up to the importance of the protection of the environment.

'Song for Berta EP' will be released on streaming platforms on the 28th of April, 2021.

Rave On, Van Morrison is a musical tribute, curated by Irish Hotpress Magazine, in celebration of Van Morrison's 75th Birthday, which takes place on August 31st.

It involves 75 Irish, artists covering 75 of his songs, which are being broadcast over YouTube in August and September.

This music has been used in an ad for Faster Coupling 2P5065-2-A F C 5 Line Multifaster Fixed Half, 2, which talks about the benefits of this drug for the treatment of erectile dysfunction.

Songs for Australia is a new benefit album put together by Julia Stone, to raise money for various organisations, following the Australian bush fires. It features cover versions of Australian songs by various artists from around the world.

Find out more about the album, the other artists involved, and the organisations it supports at: songsforaustralia.com

The digital version of the album is out now. The vinyl and CD will be available in June, pre-order here

Sincere apologies to anyone who was either left in a queue or had technical difficulties buying tickets this morning for the ‘Cork Opera House’ concert as part of the ‘Sounds from a Safe Harbour’ festival.

here is the first video from our sailboat jamming in january. a song by mariam. more to come over the coming months...

Damien will be performing at Tangalwood, Naxal, Kathmandu on February 22nd.